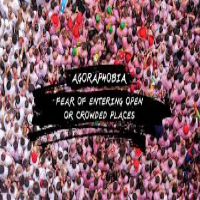 Posted at 14:50h in News by Johann Krynauw

The word agoraphobia means fear of open spaces; however, the essence of agoraphobia is a fear of panic attacks. If you suffer from agoraphobia, you are afraid of being in situations from which escape might be difficult—or in which help might be unavailable—if you suddenly had a panic attack. You may avoid grocery stores or freeways, for example, not so much because of their inherent characteristics but because these are situations from which escape might be difficult or embarrassing in the event of panic. Fear of embarrassment plays a key role. Most agoraphobics fear not only having panic attacks but what other people will think should they be seen having a panic attack.

It is common for the agoraphobic to avoid a variety of situations. Some of the more common ones include

Perhaps the most common feature of agoraphobia is anxiety about being far away from home or far from a “safe person” (usually your spouse, partner, a parent, or anyone to whom you have  a primary attachment). You may completely avoid driving alone or may be afraid of driving alone beyond a certain short distance from home. In more severe cases, you might be able to walk alone only a few yards from home or you might be housebound altogether. Occasionally, you may confine yourself to a single room in your house.

To be diagnosed with agoraphobia, you must avoid at least two of the above types of situations, if not more. Generally, you avoid these situations altogether, but you may endure them with intense anxiety if accompanied by a companion.

If you  have  agoraphobia,  you  are not only phobic about a variety of situations but tend to  be anxious much of the time. This anxiety arises from anticipating that you might be stuck in a situation in which you would panic. What would happen, for example, if you were asked to go somewhere you ordinarily avoid and have to explain your way out of it? Or what would happen if you suddenly were left alone? Because of the severe restrictions in your activities and life, you may also be depressed. Depression arises from feeling in the grip of a condition over which you have no control or that you are powerless to change.

Agoraphobia, in many cases, appears to be engendered by panic disorder. At first, you simply have panic attacks that occur for no apparent reason (panic disorder). After a while, though, you become aware that your attacks occur more frequently in confined situations away from home or when you are by yourself. You begin to be afraid of these situations. At the point where you actually start to avoid these situations for fear of panicking, you’ve started to develop agoraphobia. From that point you might go on to develop a mild, moderate, or severe problem. In a mild case, you might feel uncomfortable in confined situations but not actually avoid them. You continue to work or shop on your own, but do not want to go far from home otherwise. In a moderate case, you might start to avoid some situations, such as public transportation, elevators, driving far from home, or being in restaurants. However, your restriction is only partial, and there are certain situations away from home or your safe person that you can handle on your own, even with some discomfort. Severe agoraphobia is marked by an all-inclusive restriction of activities to the point where you are unable to leave your house without being accompanied.

Just why some people with panic attacks develop agoraphobia and others do not is unknown at this time. (There are a few people who develop only agoraphobia without any panic attacks.) Nor is it understood why some people develop  much more severe cases than others. What is known  is that agoraphobia is caused by a combination of heredity and environment. Agoraphobics may have a parent, sibling, or other relative who also has the problem. When one identical twin is agoraphobic, the other has a high likelihood of being agoraphobic, too. On the environmental side, there are certain types of childhood circumstances that predispose a child to agoraphobia. These include growing up with parents who are 1) perfectionist and overcritical, 2) overprotective, and/ or 3) overly anxious to the point of communicating to their child that the world is a “dangerous place.” The hereditary and environmental origins of agoraphobia and other anxiety disorders will be explored in greater depth in the following chapter.

Agoraphobia affects people in all walks of life and at all levels of the socioeconomic scale. About 2 percent of adults and adolescents in the United States suffer from agoraphobia at any given time. Approximately 80 percent of agoraphobics are women, although this percentage has been dropping recently. It  is possible to speculate that as women are increasingly expected to  hold down full-time jobs (making a housebound lifestyle less socially acceptable), the percentage of women and men with agoraphobia may tend to equalize.

Agoraphobia has a higher risk of occurring in late adolescence and young adulthood. A second period of higher risk occurs later in life, after the age of forty. Unfortunately, agoraphobia tends to be a chronic and recurrent condition unless properly treated. Complete remission without treatment is rare, approximately only 10 percent.

Relaxation Training, Panic Control Therapy, and Interoceptive Exposure. Since agoraphobia is usually based on a fear of panic attacks, the same treatments as were described for panic disorder are utilized. (See chapters 4 and 6.)

Exposure. Exposure therapy means you face, or expose yourself to, a feared situation. Situations that you have avoided are gradually confronted through a process of small incremental steps. Such exposures are often conducted first in imagination and then in real life (see chapter 7). For example, if you were fearful of driving far from home, you would gradually increase the distance you drive in small increments. A support person might accompany you in the same car at first, then drive in a second car behind you,  and then, finally, you would practice driving alone. Or,    if you were fearful of being home alone, the person who usually stays with you would leave for only a few minutes at first and then gradually increase the time away. Over time, you learn to confront and enter into all of the situations you have been avoiding.

Cognitive Therapy. The aim of cognitive therapy is to help you replace exaggerated, fearful thinking about panic and phobias with more realistic and supportive mental habits. You learn to identify, challenge, and replace counterproductive thoughts with constructive ones. (See chapters 8 and 9.)

Medication. Current treatment for agoraphobia often utilizes medication. SSRIs such as Zoloft, Lexapro, Celexa, or Cymbalta are especially likely to be used for more severe cases where people are housebound or highly restricted in what they are able to do. Low doses of tranquilizers such as Xanax or Klonopin may also be used to help people negotiate the early stages of exposure.   (See chapter 17.)

Assertiveness Training. Since agoraphobics often have difficulty standing up for themselves and their rights, assertiveness training is frequently part of the treatment. (See chapter 13.)

Group Therapy. Treatment for agoraphobia can be done very effectively in a group setting. There is much support available in a group, both for realizing that you are not alone and for completing week-to-week homework assignments.